Sylvia Russell is only 17 years old and has accomplished so much during her time at J. Clarke Richardson Collegiate.  She has participated in OFSAA Cross Country (2013-2015), Athletics Ontario Cross Country Team Champions 2014, finished in the top 20 at OFSAA XC 2014, participated in OFSAA Track and Field 2014, finished in the top 20 at OFSAA Track 2014 (3000m), 4th place finish Legion Nationals 2015, finished in the top 15 at OFSAA XC 2015, was an Athletic Ontario Athlete of the Year Award finalist 2015. She ranked 7th in Canada Youth Division 2000m Steeplechase (7:08.25), she ranked top 5 in Youth Division 3000m Steeplechase (11:40), she was the recipient of J. Clarke Richardson’s Cross Country MVP Award (2013-2015), she was the Athletics Ontario Provincial Outdoor 2000m Steeplechase Champion 2015, she is the holder of all middle/ long distance event records at J. Clarke Richardson, she was the J. Clarke Richardson’s XC Team Captain 2015 and she was in the top 25 in Junior Division at the Canadian XC Nationals 2015.

Everyone inspires me in a way, for example my coaches inspire me because even when I didn’t believe in myself they believed in me, just having that support group motivates me to do well for them. Knowing that I’m improving motivates me too, one of the comments that one of the coaches from a university said to me was the potential that you have in Gr. 12 is ridiculous you aren’t even close to tapping into what you can really do. That motivates me too because I want to see the highest level I can go.

Hopefully with an Olympic participation under my belt in Tokyo. Since I’m going to The State University of New York at Buffalo I hope to be working on my Masters and either on my way to becoming a University coach, an athletic psychologist or an athletic therapist.

If you were to make it to the Olympics what event would you want to be involved in?

Definitely steeplechase because right now I’m working hard to try to make the Canadian Jr. team one competition is in Poland and one is in Russia, I really want to make that team. Right now I’m first in Canada for my age group in 3 Km steeplechase if that stays the way it is I’ll be set for at least one of those competitions. I definitely want to make team Canada and that is a goal I have that I can either make this summer or 5 years from now, and hopefully I will be able to continue working towards that goal. 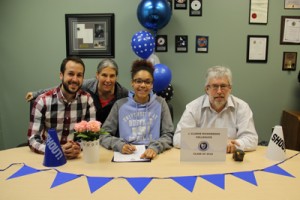 How did you get to where you are today?

I think again it’s all of the support that I’ve had, the people around me have given me all of the tools I need to be successful. Also just staying active and pushing my self to the next level.

I really want to make a difference if I could make a difference in at least one person’s life that would be fantastic because if I was a university coach I would be able to help students be better athletes. I want to also do more than just improve their athletic skills I want to help other be confident in themselves and push them to their limits so if I could that for someone else just like my coaches have for me that would be awesome. I want the work that so many people have put into me to pay off.

Eye on the Storm wants to formally thank Sylvia for the time she took to participate in the interview and be sure to watch out for Sylvia during the Tokyo Olympics in 2020.  Check out the next student profile in our series: Trending Ten of 2016.