On December 9th 2016, Richardson’s library was closed down in Period 4 for “The Coding Party.” Students were met with cookies from the cafeteria, juice and music, and, whether new to programming or veterans in their fields, logged onto their computers and started working on the “Hour of Code”.

The Hour of Code is an event that was invented by the non-profit “Code.Org”, a group of people dedicated to getting anyone – specifically elementary and high school students – interested in the programming field. The video that launched their website, entitled “What Most Schools Don’t Teach” went viral in early 2013, gathering over 13M views.

This year, Computer Science teachers Mrs. Kanavalli and Mrs. Ritchie organized the first annual Hour of Code at Richardson and hope to continue the event every year to promote the Computer Science curriculum and also educate students on the importance of computer science as a career, especially in today’s society. They say that Computer Science isn’t just a subject for “nerds” or “uncool” kids and that offering cookies, juice and an otherwise relaxed environment is a good way to lessen the stereotypes often placed on programmers.

“A lot of people think that coding is just for boys, so I wanted to prove them wrong.”

Mrs. Kanavalli also arranged for a few Grade 12 students who have shown major interest or excelled in the computer science curriculum in her past classes to help the participants with issues if they had any. These students included Jonathan Spraggett, Jeremy Tobing, Praveen Vijayikumar and, full disclosure, this author. As some students faced a few challenges during the Hour, the Grade 12 students were more than happy to offer some advice on how to get out of a program crash or error, and give tips on where to advance if they found something too easy.

EOTS: ” Why did you decide to involve yourself today?”

Anjali: “A lot of people think that coding is just for boys, so I wanted to prove them wrong”

Sahar: “Ok. So I already signed up but I convinced my friend to join because my brother really wanted us to do it, so that’s how we got into this coding academy. ”

Nazilla: “And my teacher, Mr. Winkelhorst really wanted us to join is ’cause he said its good for improving in math”

EOTS: “How are you liking it so far?”

Sahar: “I really loved it so far, I think its so fun!”

EOTS: “Are you interested in computer science as a career field?”

Sahar and Nazilla: “Yes, I want to do it every year!”

“I’m going to convince her hopefully”

EOTS: “What have you tried so far?”

Anjali: [I tried the] Minecraft and Flappy Bird. I like the Flappy Bird one because of the different characters and [the programming challenges] are pretty fun.”

Sahar:: “I did Flappy Bird and Moana.”

Nazilla: “I did Moana too and I found it very helpful!”

When the Hour of Code concluded, many students had learned something new about programming, and throughout the Hour, Eye on The Storm observed students asking questions, helping their friends or “elbow partners” and in general sharing tips, tricks or exciting new concepts. 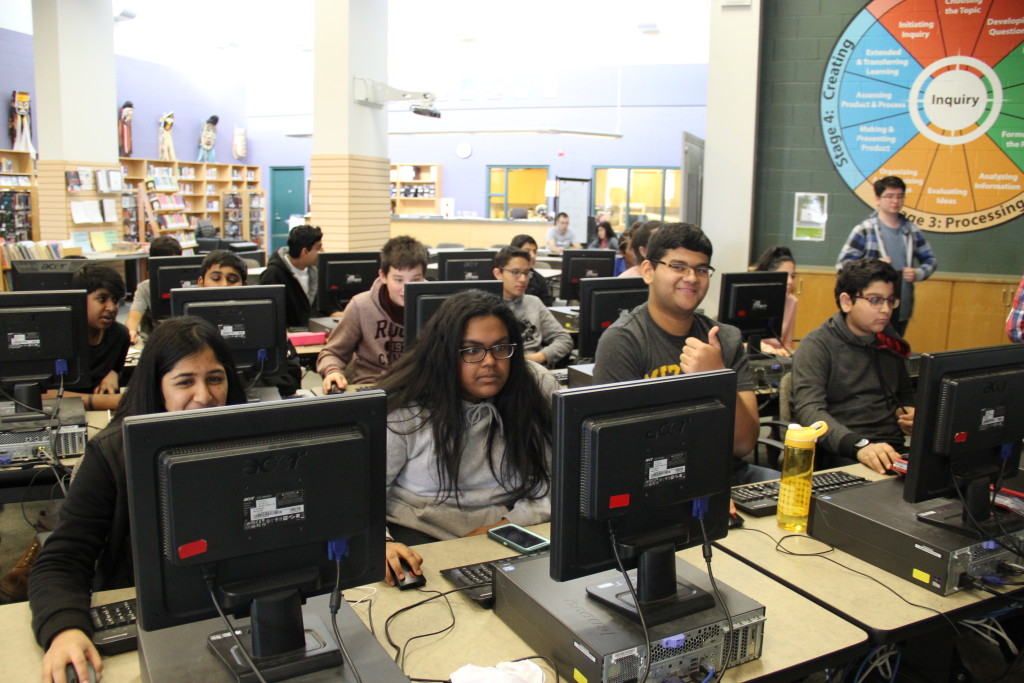 Sea Monsters or a myth of the sea?