Victoria Thorn is a grade 12 student at J. Clarke Richardson Collegiate.  She has contributed and have made several impacts on our school community. We have selected her for this interview because she has been making a difference.  We also believe that she can do great things with what she will be studying this coming Fall. She has been involved with RAC, lacrosse, DECA and a whole lot more to keep her busy.

As a Gr.12 student, what do you hope to achieve as this is your last semester?

As my last semester here, I want to get involved as much as possible, because the last three and a half years at J Clarke Richardson have shaped me into who I am right now, and getting involved allows me to give back to the school as they became important to me.

What are your dreams and aspirations

So after high school, I want to pursue post-secondary, though I’m not one hundred percent sure of where it is I want to go yet. But overall, I would like to get a good education and do
something in the business field. I’m excited for the future has for me, but I do not have a clear understanding of where I want to go.

Do you at least know what were your top three choices? What are they?

Yes, my top two universities are Brock and Western, but I’m tossed in between as to which one I should go to. 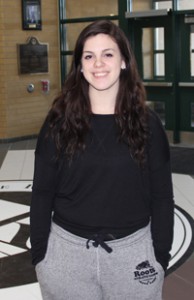 What inspires you? What motivates you?

Seeing that what I do around the school has an effect on the students inspire me, making a difference at JCR and being a role model. Also, being around people with similar interests as mine inspires me because it helps me connect with those as a demonstrating leader.

Was there a certain moment in your life that inspired you to work towards what you want to pursue? You mentioned you want to get into business, so what was it that made you decide to study business?

At first, I thought I would go into the science field and wanted to become a pharmacist. So, I took all of the sciences and I realized I hated it. So I picked something else and I took accounting and I loved it as I was good at it and that was how I decided to pursue business rather than the sciences.

Ever since you joined DECA, has DECA also influenced you to pursue business in post-secondary?

For sure, because DECA is good club and even though you would not be pursuing business, it is a great club to join as business is part of every field and it helps you to get a feel of it in the real world. DECA can teach anyone, other than business students.

What inspired you to be where you are right now?

The only thing that explains how I got to where I am right now as a person are the people I surround myself and the things I get involved in. So getting involved in school in grade nine made me test out which clubs are best suited for me and where I would fit in. Even for some that I wasn’t too sure of, I just joined and see where that went.

If you have a chance of looking back, would you change anything and if so, what would that be?

I would not change anything because I’ve been attending JCR since grade nine and it is sad to see myself leaving from a place that contributed so much to my life. But from those experiences, I wouldn’t change anything as these four years ran by pretty nicely for me.

Will you get as involved in university like you are right here, right now?

Yes, I definitely will

There you have it, another student with big dreams. She sure will have something to look forward to after high school. She has contributed to our school from when she was grade 9 and has put in a lot of heart and effort into what she loved. She inspires all of us for what she does for her school.  Be sure to check out other student profiles as part of our series: Trending Ten of 2016.