Mahjabeen Baig, a grade ten student at J Clarke Richardson, is an outstanding performer in J. Clarke Richardson Collegiate’s musical theatre program. She has landed major roles in school  musicals like Young Tarzan in Tarzan the Musical and The Gingerbread Man (Gingy) in Shrek the Musical. She is a talented performer which is why she was chosen as one of the people to watch in 2016. Mahjabeen spoke with Eye on The Storm about her accomplishments as a student and her goals for the future.

Why did you get into the musical at J Clarke?

I got in because I have been singing since I was eight years old. I was in rock band in elementary school in grade six and I formed m own mini rock band with my friends. From there I started performing and the teacher directing the rock band, Mr. Simmons, was encouraging me to join musical theatre he even knew Mr. T and Mr. Whyte. So I auditioned for it and they accepted me on the spot.

What role do you hope to get in the upcoming musical, the Little Mermaid? 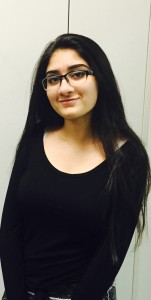 I am hoping for Ariel, however I am really happy with any major role.

What was your favourite character to play in J Clarke’s musical?

I think young Tarzan is still my favourite, it was the first year and everyone was so inviting and I was in grade nine and I didn’t really feel like a newbie I was just really comfortable. Young Tarzan was such a big role, I got a solo and a duet and I was really close to Adrianna who was young Terk. Which is why young Tarzan it is one of my favourite roles.

So where do you see yourself in five years?

Business school, anything in marketing. Specifically business that has an element of the arts because I am more of a creative person than an analytical one. My arts background developed through music theatre adds a layer of creativity to my business tasks for example presentations come naturally to me because I have ad exposure performing in front of audiences.

Where did you go to for elementary School?

Is there anything else you want the J Clarke Student Body to know about Mahjabeen?

I am starting a band, so you should watch out for posters and news about it through the school

What is one word or phrase you would use to describe yourself?

Thank you Mahjabeen Baig for the interview and we wish you good luck on all of you future endeavours!  Be sure to check out the next student profile in our series: Trending Ten of 2016.