The Impact of ‘Humans of New York’ on Society

“HONY is one of the only things keeping people from getting lost in the matrix.”- New York City inhabitant

Almost everyone with an account on Tumblr, Twitter, Facebook or Instagram has likely wondered what they would talk about if they were ever to come across popular photographer and storyteller, Brandon Stanton. His humanitarian work in giving a voice to the powerless through the Internet has caused him to be admired and supported worldwide. Humans of New York is a great example as to how the digital age provides the powerless and the powerful to be able to empathize with and help one another.

Stanton is widely known throughout the world as the man who started the blog that stole our hearts. With more than 16 million likes on Facebook, 4.6 million followers on Instagram and around 383 thousand followers on Twitter, it is safe to say that “Humans of New York” has become one of the most popular and loved blogs known to date. And with his book, that is based off of his blog, becoming a #1 New York Times bestseller, it is obvious that Stanton is making his mark in the publishing world as well. The fact that his global audience is continuously growing does not seem to have too much of an effect on him though, and he continues to make it his number one priority to share the lives of strangers in New York City rather than let fame get to his head. During an interview, Stanton told the Athens Banner-Herald: “I try my best not to change as HONY gets bigger… main thing is just to remember that hard work got me here and only hard work will keep me here”. In the past two years, Stanton has taken his mission to a global level, visiting countries such as Pakistan, Iran, Iraq, India, Sudan and the Ukraine, and more. He has spoken to many people within these countries, gaining insight into the cultural differences and similarities along with struggles that the citizens are facing, whether personal or political.

During his recent trip to Pakistan, Stanton had a chance encounter with a woman named Syeda Ghulam Fatima, who had been working for many years to end bonded labour. He used his resources to set up a way for his massive following to donate to her cause and managed to acquire almost two million dollars to aid her organization, the Bonded Labour Liberation Front. A similar situation occurred a few months later while he was covering the stories of various Syrian refugees who had recently been granted access to the United States. Stanton met a young woman named Aya and learned of her family’s application for resettlement in America that had been rejected due to a reason that had nothing to do with her own character or that of her mother and siblings. Once again, Stanton reached out to his followers to sign a petition that was addressed to President Obama in order for him to join the mission to get Aya’s family to a better home in America. The petition reached nearly a million signatures and helped get her a legal team specializing in refugee appeals to fight her case, which is currently ongoing. There are countless examples as to how Brandon Stanton has had a role in bettering the lives of the less fortunate without doing anything more than sharing their stories.

The effect of Stanton’s work is tremendously positive. The comments people leave on the pictures he posts always seem to contain words of encouragement and some are even inspired to share their own stories. Anyone who follows HONY on any one of its social media accounts or has the book always has a positive response when asked about the way the blog has affected their lives. When asked about her feelings on the blog, grade 12 student Ramisha Rashid says “There’s something about Humans of New York that makes me want to do as much as I can to create positive change within the world. It’s like a chain reaction; Brandon Stanton’s kindness causes others to be kind as well.” Whether someone has become more aware of the issues within the world around them or simply has realized that there are people out there going through similar problems as them, the blog has opened the eyes and hearts of nearly anyone who stumbles across it. Many stories about awkward first dates or a picture of a child’s outfit in his many “Today in microfashion…” photos are able to brighten up someone’s day as they scroll through their Instagram feeds. By raising awareness about social and political issues, providing support to those who need it and simply providing the beaten down with a voice, Stanton has helped society look into the better parts of itself and become more positive and empathetic as a result. 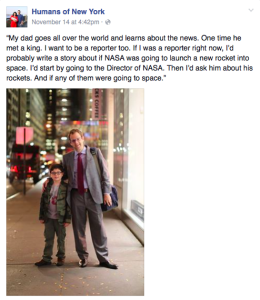 A great explanation as to why this blog has had such an impact on society can be found in what a man who was approached by Stanton first said to him: “…HONY is one of the only things keeping people from getting lost in The Matrix.” After seeing the effects that the stories of strangers have had on a global audience, it can be assumed that this man knew what he was talking about. Stanton’s blog has caused those in all socio-economic statuses to be able to assist one another in many ways, through gaining insight on the struggles and successes all types of people go through. Through the simple task of taking a person’s picture and talking to them about their life, Brandon Stanton has changed the lives of millions of people.

Girls Who Code: Looking Ahead Webinar