Opinion: Why Donald Trump Should Go To Jail

On January 20th, the controversial 45th President of the United States, Donald Trump, left his office as the President and has been succeeded by the 46th President, Joe Biden. Before Trump left office, the United States Congress’ House of Representatives impeached Trump on a charge of an incitement of insurrection, based on his actions surrounding the breach of the Capitol in Washington, D.C, on January 6th. The House of Representatives voted in favour of impeaching Trump, with 232 votes in favour over 197 votes against impeachment. 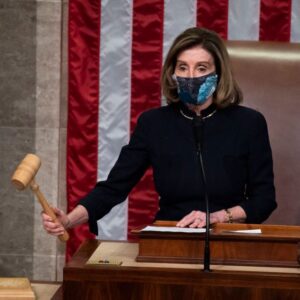 Above: House speaker Nancy Pelosi during the impeachment trial against Donald Trump

When Trump left his office as the President, he lost all immunity against criminal prosecution and civil lawsuits as a civilian, and must now face justice in court. As of November 15th, 2020, Trump has allegedly directed Michael Cohen to make hush money payments – to which, Cohen pleaded guilty to – as well as being under investigated for tax & bank fraud by Manhattan District Attorney Cyrus Vance, a civil investigation into the Trump Organization and real-estate fraud, three lawsuits that accuse Trump of not seeking the consent of the United States Congress in accepting any benefits from foreign states, allegations of sexual misconduct by at least 26 women, and has been sued by his own niece, Mary Trump, accusing her uncle and two of her siblings of cheating her out of her own inheritance and pressuring her to give up her interests in the Trump family’s business.

Above: Donald Trump speaking to his crowd on January 6th

In contemporary times, few Presidents, if any, have been able to match the amount of allegations, investigations and lawsuits as Trump himself. Even Bill Clinton, who is infamous for having an affair with an intern of his, which got him impeached, has not gotten as many lawsuits, allegations and investigations as Trump. This alone is quite scary for some.

None of the criminal investigations have built up considerable evidence enough to send Donald Trump to prison, however his speech on January 6th shortly before the storming of the Capitol in Washington, D.C certainly said something about him.