Full Steam Ahead! The History of the Toronto Rail Lands, the CPR and the CNR 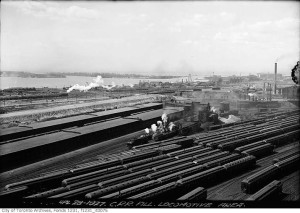 It’s 1950, the Golden Age of the railway has just started and the entire lakeshore downtown Toronto is owned and operated by the CPR and CNR Railway Companies. The Royal York (now known as the Fairmont Royal York hotel) is bustling with customers of the rail lines going to and from Union Station catching their trains or arriving for a relaxing stay at the Royal York.
The CNR Roundhouse was a maintenance facility for locomotives and railway cars which stood next to where the C.N. Tower is located today. Sitting kitty corner to this was the CPR roundhouse and train shed which served the same purpose.
During this time, there was the conversion from steam powered to diesel powered and soon to diesel electric locomotives. Later, the CPR and the CNR would eventually drop all their passenger services and eventually form VIA Rail Canada. A few years after that the government would  form GO Transit. But as it stood in the 1950’s, it looked as if there was no end to the success of the CNR and CPR.
The CPR started on July 1 1867. It brought both the east and west coast of Canada together for the first time. As part of the deal, Nova Scotia and New Brunswick were promised a railway link to the new provinces of Ontario and Quebec. In the early days of construction, the workers faced many challenges such as building tunnels through the mountains. Issues with the Conservative Party of John A. McDonald often got in the way as well. This eventually caused an election and when John A. McDonald returned to power, the railway was months behind schedule of completion and in danger of being put on hold completely. However, throughout all of the issues the construction of the railroad was finally completed on Nov 7. 1885 in Craigellachie, B.C. A man by the name of Donald A. Smith drove the last spike into the railroad. Finally Canada had its first railroad.
During the war years, the CPR helped transport munitions and other supplies as well troops across Canada as part of the war effort.
Throughout history, the CPR was involved in many other famous events that helped shape Canada as a nation.
To learn more about the history of the CPR,you can visit their website at
http://www.cpr.ca/en/about-cp/our-past-present-and-future/Pages/our-history.aspx
Many people lost their lives during the construction of the railway and we owe our deepest gratitude to them. We say from the bottom of our heart, thank you for bringing Canada together for the first time in history.
Today, there are many museums, tourist railways and book and videos that you can check out to find out more about the exciting history of the railway. Or why not take a ride on the GO train. It’s a great way to get to know the area you live in. As they say in railway talk, “High Ball” which means go ahead and full steam ahead