In 2013, Leah Anderson, a bright spirited young woman of the Cree Community in God’s Lake Narrows in Manitoba, was violently murdered so badly that police officers said that it looked like she was attacked by dogs. Her story did not make national headlines. On the night of January 4th 2013, Leah told her aunt that she was going to the skating rink with friends but was found dead two days later near a shed. The ice road that was the only route into and out of the reserve was closed on the weekend that she was murdered meaning the culprit could not have escaped. Yet her case was never solved. The man who Leah was in a “secret relationship” with months before she was slain had admitted whilst being in a drunken state to have killed someone at a party two months after her death. Leah’s family found a Facebook message sent to her by this man the next morning after she died which read,”I hope you didn’t tell on us,” causing the RCMP to suspect him. However he passed a lie detector test inquiring about his involvement in her murder.

Leah was added to the RCMP’s list of the 225 unsolved cases of missing or murdered indigenous women and girls across Canada. According to the RCMP, from 1980 – 2012 more than 1,181 indigenous females went missing or were murdered in Canada. Clearly this is not just an issue of local crimes, but a nationwide epidemic that is threatening the lives of Aboriginal women and young girls. However, when asked about making a public inquiry into the missing females, Prime Minister Harper stated, “Um, it isn’t really high on our radar, to be honest… Our ministers will continue to dialogue with those who are concerned about this.” Apparently Prime Minister Harper doesn’t think that this is an issue worth national concern, therefore it should not be a concern to him. Indigenous women make up only 3% of the Canadian population, yet they are the largest group of Canadian women who are victims of brutal acts of violence. About 72% of the indigenous women who were killed were murdered by a “spouse, family member or an intimate acquaintance.” Despite this, Prime Minister Harper does not constitute this “high on his radar.”

Approximately 26% of self identified Aboriginals in Canada choose to live on the reserves since it is where they can feel at home because they can follow their culture and traditions as they wish. Leah was murdered in her reserve, God’s Lake Narrows, where its conditions, like many of the Aboriginal reserves, are not ideal due to overpopulation, lack of basic services, abuse and addiction.

Fortunately, the Canadians who will not tolerate this lack of attention and action for these women by the government have banded together and have worked to spread the message through social media platforms and peaceful protests. Holly Jarret of Hamilton, the cousin of Loretta Saunders, started the “Am I Next?” campaign where Aboriginal women take a picture of themselves holding a sign which reads “Am I Next?” and post it on social media. The campaign’s goal is to awaken Stephen Harper about the possible consequences his lack of action could caus 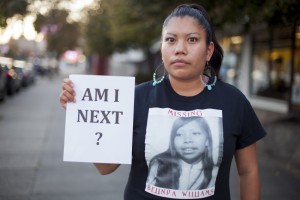 e, and to prompt a national inquiry for the missing and murdered Aboriginal. Loretta Saunders, a 26 year old criminology student who was pregnant, was found dead last year, murdered by her roommates and left near the Trans Canada Highway in New Brunswick. To make change possible, it is imperative that we students and we Canadians are informed about issues that matter, to create a change that is needed for the well being of others.

Why did they change our Chromebooks? (2022 Update)