Mara Stroe is a grade eleven student who sat down with Eye on the Storm to discuss her achievements at LOSSA where she placed first in tennis last year.  Mara also talks about her love for the game of tennis.

When did you start playing tennis?

I started when I was around seven/eight years old and I started doing lessons around that time. But I obviously played when I was younger, too.

How did you get to be where you are now (the level of competition)?

I practiced a lot. My afternoons pretty much just consist of me going to tennis and just doing homework. 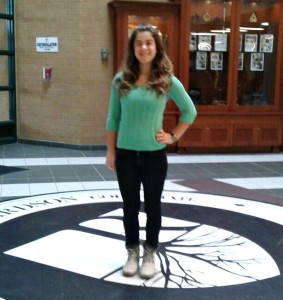 What is your inspiration or motivation?

Describe how you felt going into that final match at LOSSA.

It was very stressful. Grade nine was more stressful than grade ten ‘cause I wasn’t sure what the competition was, it was my first year, but grade ten was a little bit more comfortable even though I was going into my senior level. But it was still pretty stressful.

But it paid off in the end.

In five years, where do you see yourself?

I see myself playing tennis for a university team.

Have you any ideas which universities or colleges you’d look into?

I was thinking U of T mainly. I haven’t really gone in depth about the whole university thing, especially with tennis because U of T is … my main goal and my backups and things I can just decide later.

What are you reading right now?

We thank Mara for a chance to get to know her better and we applaud her fantastic achievements of 2014-2015 in the hopes that she will make a re-appearance in 2016. Be sure to check out the next student profile in our series: Trending Ten of 2016.