On Monday, November 7th, 2016, J. Clarke Richardson welcomed our Member of Parliament, Mark Holland into the school to talk to a Grade 10 Civics/Careers class in a Q&A session. Eye on The Storm’s Yash Desai and Joshua Sankarlal got the opportunity to ask some questions.

Eye on The Storm is represented in bold. Mark Holland’s responses are in regular text.

EOTS: “PM Trudeau promised that he would work on implementing proportional representation in the House, now that he is receiving criticism for backpedaling, what are your comments on this?” 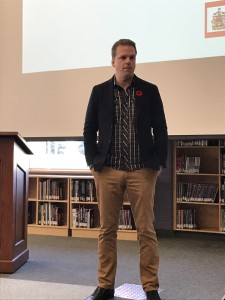 “We did say we would move to a new voting system, now we didn’t say what voting system. There are some people who want a proportional system, there are other people who want other systems. What we’ve said is that we’re not going to proceed unless we have the broad support of the Canadian population and more support than ourselves. In other words, if we’re going to change how you vote it doesn’t make sense for the Liberal Party to be the only offerer of that, because nobody is going to trust us. Right? If we say ‘Oh we got an idea how we’re gonna change how you vote, and only we’re going to implement it without broad support’ then it’s going to look like we’re fixing the system to our own interest. We’re committed to this process to try and find a consensus by working with the other parties, there’s a committee right now that’s actually working on that. The second thing is that there’s all kinds of powers that were stripped away from Elections Canada that we need to restore. I’ll give you a few small examples. One: Some of you may not know that Elections Canada had its power to promote people going out to vote taken away from it. So, they have a lot of programs to encourage young people to get involved and to vote, those programs have been removed. We’re going to restore it. Canadians who are abroad were taken away the right for them to be able vote.  In our mind, a Canadian citizen is a Canadian citizen, and if you’re living abroad, you should be given the right to vote. […] So there hasn’t been a walking back it’s been a consistent statement that we want that change to happen, but for it to change there has to be broad support.”

EOTS: “As the US elections are near, what are your thoughts on it?”

“How many people have been following the elections in the US? Kinda hard to miss right? Anybody gonna be watching it tomorrow tonight? Ya? It’s going to be fascinating. I think there’s a real problem in the United States with their two bubbles: The Democratic Bubble and the Republican Bubble, and people live in those two bubbles, and they don’t understand each other. It’s become so adversarial and so divided, everybody is fighting for a narrow group of people in  the middle. I think there’s a lot of lessons we can take from a Canadian perspective. I don’t think we want our politics to be so divided, I don’t think we want it to be so adversarial. The idea that we live in two separate universes, where one side is evil and one side is good. You guys know that’s not true. You know that just because somebody is Conservative they’re not evil. Just because someone is a Liberal, they are not good. At the end of the day, people have different opinions, we have to respect them and work together and build a consensus. This goes back to the voting system question, we can use our voting system to perpetuate that. But the United States is deeply divided. My personal opinion : I’m not a fan of Trump. I’m obviously cheering that he isn’t successful. I don’t think he wouldn’t be good for the planet, I think he’s too thin skinned, I think he’s too quick to anger. I think a lot of the comments that he’s made – particularly about women are beyond the pale and unacceptable. But it’s not our election, we’re spectators. We’ll see what they decide down there but if I have a horse in the race, it would be Hillary for sure. ” 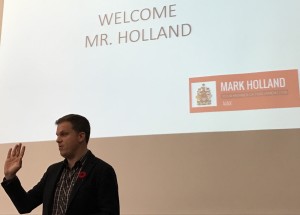 EOTS: “What is your response to people who say that getting refugees into the country is a threat to Canada’s security?”

” [ …] Can you imagine us saying ‘We can’t take  people who are Jewish into this country’ when the Nazi’s were in power? It would be abhorrent to us. Well, unfortunately, there are evils still in this world that are on par with that evil. When you look at what is happening in Syria, and the Asad regime, and the genocide that he is perpetrating against his own people. There is an obligation for the international community to respond. Even if you disagree, even if you say  ‘I don’t think Canada should go and help these people, if they’re going to be murdered by the Asad regime, let them be murdered.’ Because remember what is a refugee? A displaced person. So when there is someone sitting in a refugee camp, it is because they have escaped. So their two choices are; find a country to take them or send them back to death. Even if we say ‘ I’m okay with that send them back to death. ‘ Then what about the countries that have stepped up? Germany has taken 1M refugees, just as an example. If we said to the rest of the world ‘we are not going to do our part,  let Germany do it,  let the United States do it, let other countries do it.’  When it comes time to do trade or business, what do you think they’re going to say? ‘Forget about it, you didn’t do your share you didn;t do your part, you’re not a good member of the international community.’ And so, it’s imperative not only because there’s a human component, I think we should care about those people who are going to be murdered, but I think it is imperative also from a trade and interconnection perspective. We have an obligation as a member of the international community to do our fair share. And I think if we don’t we’re going to pay the price in terms of reputation, people wanting to visit us, people wanting to do business with us. And since Canada has stepped back up, Canada is seen as a beacon in the world, as we have a debate mostly in this country about not taken refugees fast enough. Where most of the world is shutting its borders and shutting out the world, we are seen as one of the few countries that is saying ‘No, we have a role to play’. I think that identity, that Canadian identity, is the reason why we walk into a place like Europe, and you wear that Canada pin, you get the reaction that you do. Not just because of what we did in World War 2, but because of what we continue to do today. It’s one of the reasons why people from other countries wear the Canadian pin when they travel because they know that they’re going to be treated better if people think they are Canadian. That’s worth a lot. So we get a lot in return for doing that. So the last point I would make unless there is anyone in this room who is First Nation, we are all immigrants. And every single one of us came to this shores, under trying circumstances, it’s a big deal to leave where you were and come to a new place, and every single one of us in this room have that story. And for us now, to forget that, and to forget our history and our story of how we got to this safe and fortunate place, I think – is wrongheaded.”

EOTS: “Do you have any advice for students who want to get into law or politics?”

“Sure, and the number one advice, and I give it to you no matter what you do is that you and nobody else has any idea what you can do but yourself through action. I’ll give you an example of that, when I was in high school, I was dating somebody and she was an artist, and she had a painting on the wall and it was a Segal, and if this was a real painting it would be worth about $7 million. And her grandfather was there and he looked at it and he said: “Is that yours?” And she thought he meant “do you own it?” so she said “Yes.” And he goes “Well, it shows some promise, keep working at it and maybe you’ll make something of yourself”.  And if he was told it was a Segal he would’ve said “Oh it’s a beautiful painting” or “It’s a masterpiece”. But because he thought it was hers he thought it only “something that shows a little bit of promise”. And the reality is that I was told a whole bunch of times that I had “No hope in politics” that I was “out of my mind”, my own father told me that I wouldn’t get 1000 votes and I shouldn’t run, I would only embarrass myself. And it is only going through applying yourself and putting yourself out there, that you’ll see what’s possible because the problem is people only see you as they see you today. So they see you as a student, or what you’ve already accomplished. It’s impossible for them to see what’s  possible for you in the future. So, I think you have to ignore all the voices of doubt, not only in your own head but from other people, and go after your passion. Whether your passion is law or politics or journalism or whatever it is, I can tell you so many people are not passionate about what they do, they just do it. And somebody who is genuinely passionate and believes in themselves who say “I’m going to try even if I don’t work it out, I will give it my all.” I’ve never met somebody who through their whole heart at something, that didn’t work it out, maybe not as they have planned for it to work out, but didn’t have it work out”.

J. Clarke Richardson and Eye on The Storm would like to thank Mr. Holland for his time at the school, and for allowing us to record audio and take pictures.

Josh has been on the Eye on The Storm team since September of 2015, writing mostly about technology. In September of 2016, he accepted the role of Editor on the administration board. As always, he will continue to write about modern technology from smartphones to gaming. 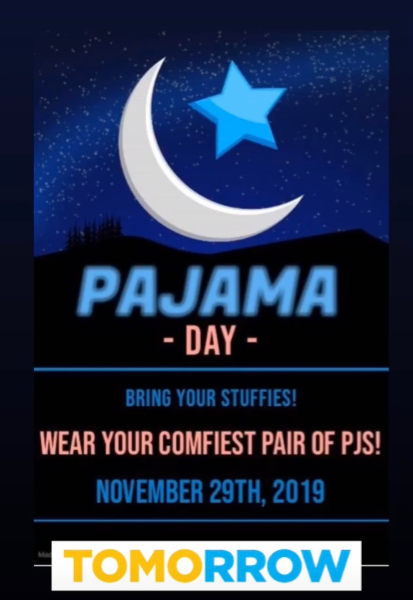 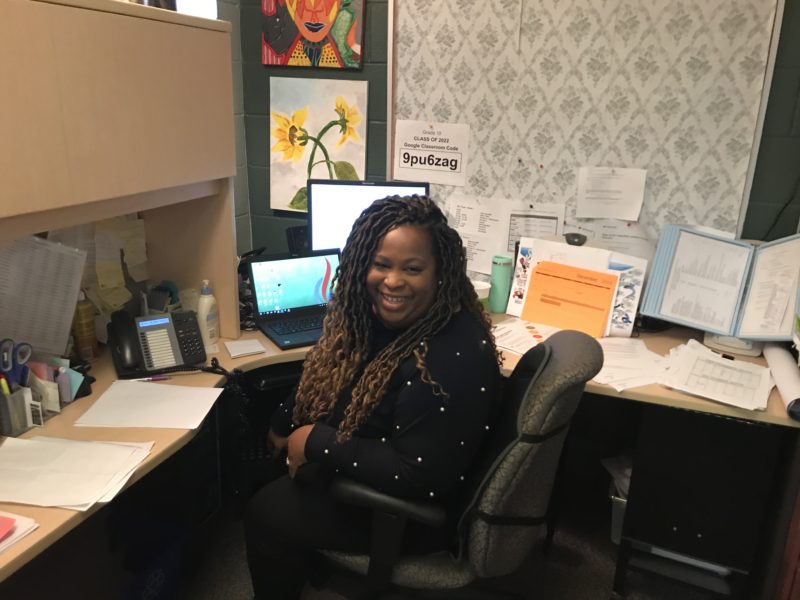